This is the third post about my trip to South Africa to volunteer with Volunteer Eco Students Abroad (VESA) in May/June 2019.

The third portion of the volunteer activities on my VESA adventure was Conservation. The first was Construction and the second was Education (covered in my previous two posts). We spent time touring and working at The Emdoneni Cheetah Project and at The Saint Lucia Crocodile Centre.

The first day of this rotation we went to the wildcat project. It was a fair drive to get out there. At the Emdoneni Cheetah Project they rehabilitate cats to be able to return them to the wild, or, if they cannot be returned due to human imprinting or injury, they are taken care of and used for education. Many of the permanent residents had been raised as pets and ended up there when they became too big, too aggressive, etc.

It was stressed to us that the purpose of the tours is to educate and that it is important to note that all the animals included in the tours are conditioned to humans and not drugged or otherwise incited to behave. We were warned to stay alert and not to get too close. Particularly with the Cheetahs who have to “accept” a person into their group before they let them get too close.

People and groups can “adopt” the cats and assist in supporting them at the project. 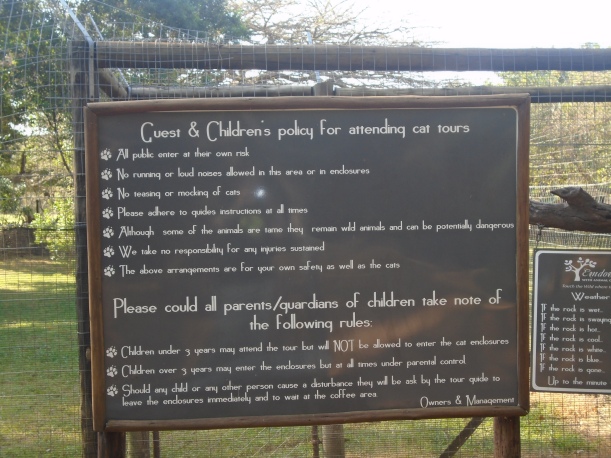 It was immaculately clean and tidy with large compounds for all the animals. We started off with a tour with one of the staff veterinarians and were introduced to four species of native wild cats. We were able to go into their enclosures as all were used to humans but were warned not to turn our backs to them.

To start the tour they sprayed us with an unlabelled spray bottle… we were told it contained cat urine so that we would be more acceptable to the cats. I really hope that was just to make us squirm! One person said it was hand sanitizer… but it did NOT smell like hand sanitizer!

The first cat we were introduced to was the African Wildcat… 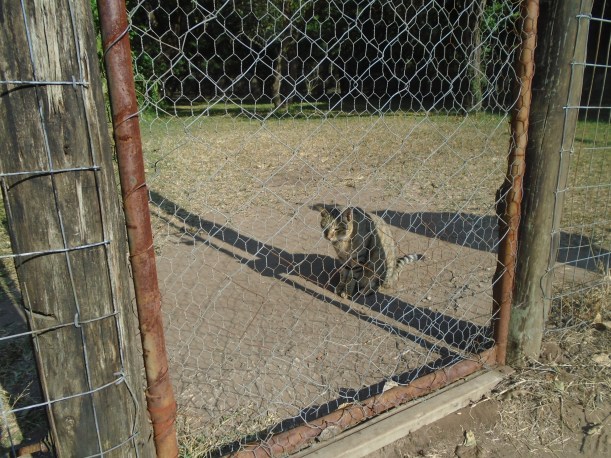 Look at that poor little kitty behind that great big fence! Just the size of a regular tabby cat. We were warned to keep an eye on him when we went in. Apparently people confuse these guys with domestic cats all the time and start feeding them, etc.

He wouldn’t cooperate and pose where the light worked – the sunlight was intense. But… honestly, would you not assume that was a regular old domestic tabby? They are considered the direct ancestors of modern domestic cats.

Then we met the Caracal. Gorgeous beasts! He was a poser, kept moving and flopping down in front of the group. There were apparently others in the enclosure but they stayed out of sight.

They have ears like a Lynx and the colouring of a Cougar, and are not that big.

The next cat we met was a Serval. This guy paced around and was checking us out the whole time.

Servals are marked a lot like a Cheetah but are quite small. Because of that people try to make pets of them.

Then we got to meet the Cheetahs! Their compound is huge. There are two males – brothers – in the enclosure. They were raised by humans so will never be released to the wild. However, they are still wild and everyone was very careful. Although Moya appeared completely unconcerned with us being there. He also is very photogenic! 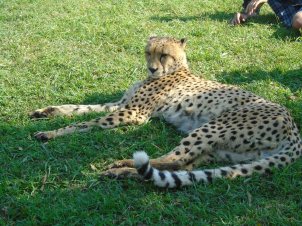 Those photos were zoomed in, the next was up pretty close!

I love that photo!

After we listened to the talk about them we were allowed to pose, in very small groups, at a specific distance, to have photos taken with him. The lighting sucks due to the position, but Moya had no intention of moving. We were given strict instructions that if we shared the photos of ourselves with the cats we had to stress that the animals are conditioned to humans and are there because they cannot be returned to the wild, AND that in no way are they drugged or otherwise made docile. 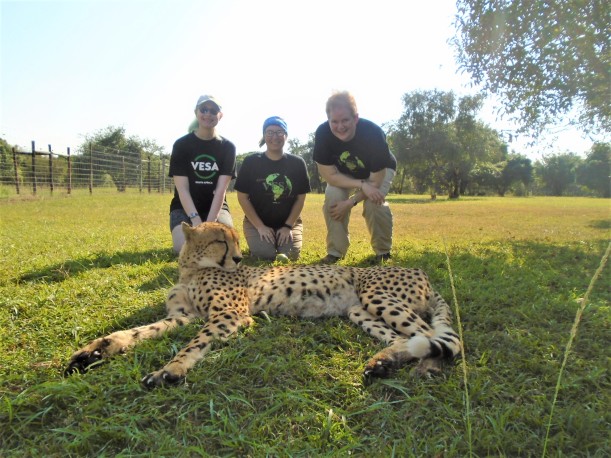 I’m crouching awkwardly as I am not able to kneel – I’m old and the knees don’t work.

After we finished the tour we went to work clearing out scrub brush in an area they were going to expand into. There were shrubs that were poisonous if eaten and thorn bushes, and things with monster roots to get out. Not to mention wasp nests and termite mounds! We went at them with rakes, pick-axes and shovels.

While I was raking out stuff my foot got tangled up in something. I stopped and looked down and there was a circle of wire wrapped around my leg. So I bent down to grab it and stepped out of it. It looked like fence wire to me – being raised rural I’ve seen a lot of wire left lying around fence lines. So I picked it up and put it over near the pile of brush we were making.

When our team leader came back he picked it up and asked where it came from. He was furious. It was a snare. I told him I’d been caught in it. He was really upset as it was actually set in the game reserve. He explained how they worked – animal steps into it, and as they struggle it tightens.

We took it back to the tool shed and left it there.

Our next stop was the Saint Lucia Crocodile Centre. 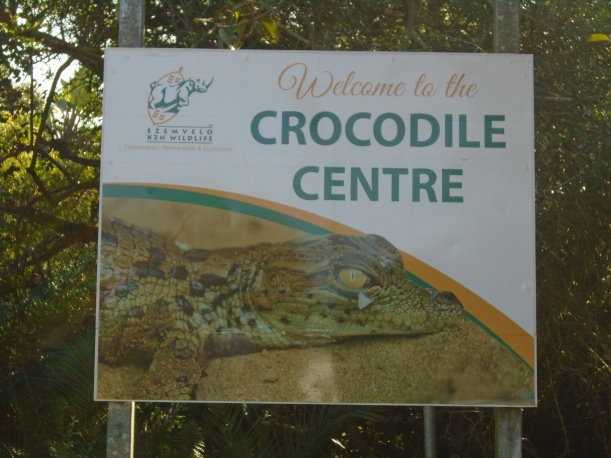 First we got a tour of the facility and were introduced to the various species and residents. 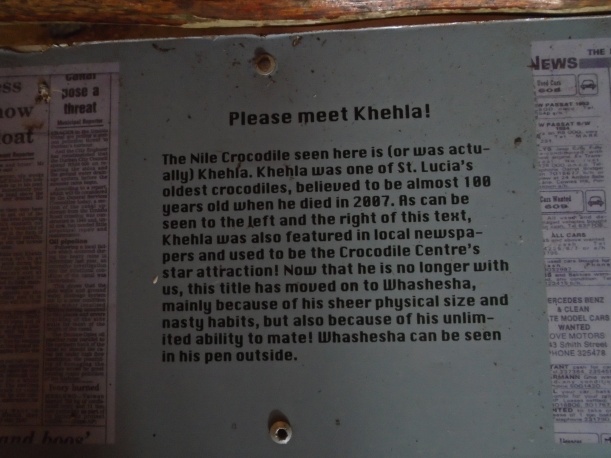 They have several man-eaters there – BIG ones. I’m just glad the other groups got to clean their enclosures! 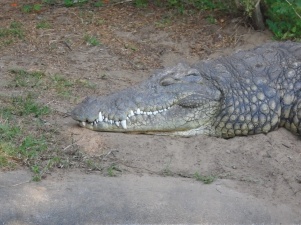 They rehabilitate to return to the wild (but not the man-eaters!) and also run a hatchery so they have crocs of various ages. 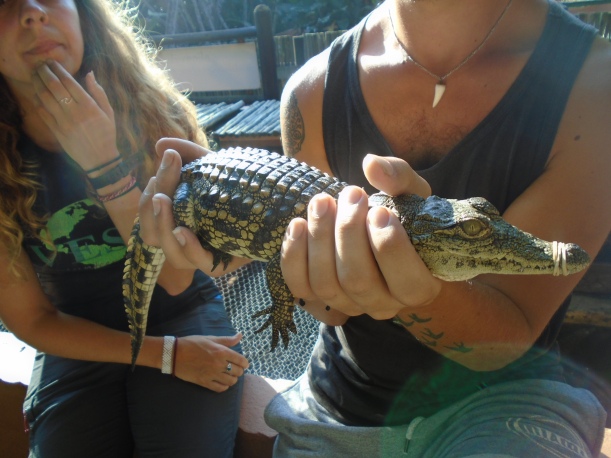 They have residents from other parts of the world there too.

Then we got to work. The project we worked on was a water purification system set-up in one of the crocodile enclosures. It was a series of “ponds” set-up to drain into each other. So it involved digging huge holes in the ground, lining them with cement, etc. As described in my first post about the Construction project, the cement was mixed and moved by hand.

I ended up plastering the end wall of the top pond – my experience with cake decorating came in really handy! It was a wall made out of bags of cement – onion bags filled with cement, with some bricks on the end. So it wasn’t flat, or straight. It started off with three of us being shown what to do but the other two (guys – they wanted something more… physical to do) left and it was just me. I was slapping fresh cement on the wall and smoothing it out all by myself. I really enjoyed it!

Other work involved digging other ponds and lining them ready for cement. The group posed in one – a couple of us did not get in the hole as we didn’t think we would get out again! 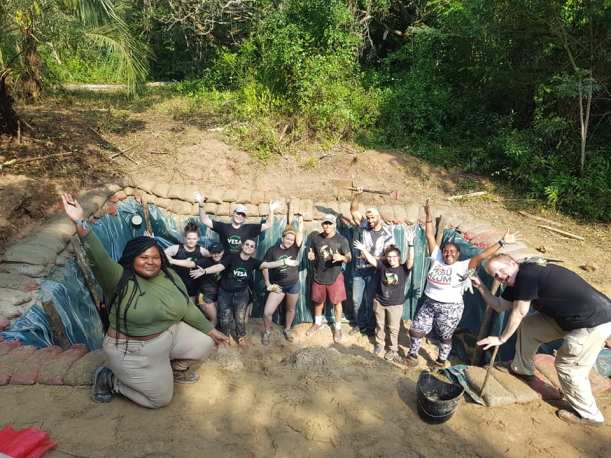 The enclosure this was in was really big and there were crocodiles in it. They were up at the top near the gate and we were told that as they were narrow snouted that they really wouldn’t hurt us, as biting us could break their jaws. Um… but did THEY know that? Luckily we didn’t find out.

The next project we worked on was painting the fence around one of the big enclosures of Nile Crocodiles. The fences are doubled up and we were painting the outer one, so no danger, other than bugs.

This was the guy and his gals inside the fence we were painting.

There were lots of butterflies around – swarms of them as a matter of fact.

That wraps up the volunteering portion of my trip.

My next posts will cover the other activities like the visit to the iSangoma – a traditional Zulu healer, the Hippo Cruise in the Saint Lucia Estuary, the safaris at a couple different game reserves, my visits to Swaziland/eSwatini and Mozambique!

To find out more about VESA check out their website at www.vesabroad.org