This is the fifth post about my trip to South Africa to volunteer with Volunteer Eco Students Abroad (VESA) in May/June 2019. The first three covered the volunteer projects I worked on, the rest are about the activities, tours, safaris and places visited.

Our big safari was to Hluhluwe Imfolozi Park. This park is known to have the Big Five as residents, but no guarantees of seeing any of them. The Big Five are Elephants, Rhinoceros, Water Buffalo, Lions and Leopards. 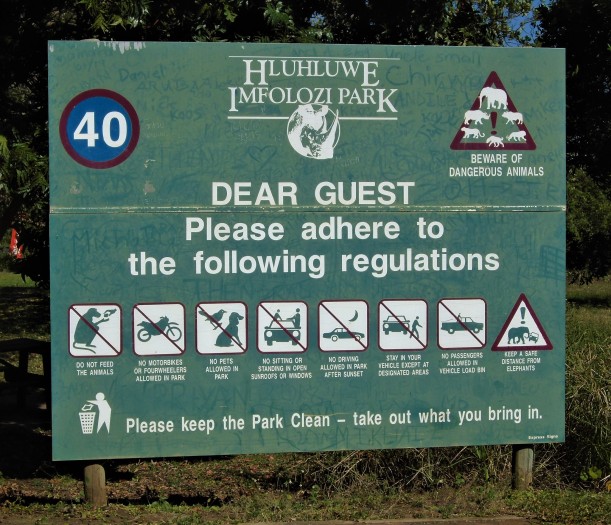 We left very early… Everyone up at 4 a.m. and we hit the road by 5 a.m. It was pitch black. The sun was just barely rising when we arrived at the park. We ate when we got there from packed breakfasts that had been brought along.

We divided up amongst the Land Cruisers and headed out. The best time to catch the animals is when they are moving to graze in the mornings. 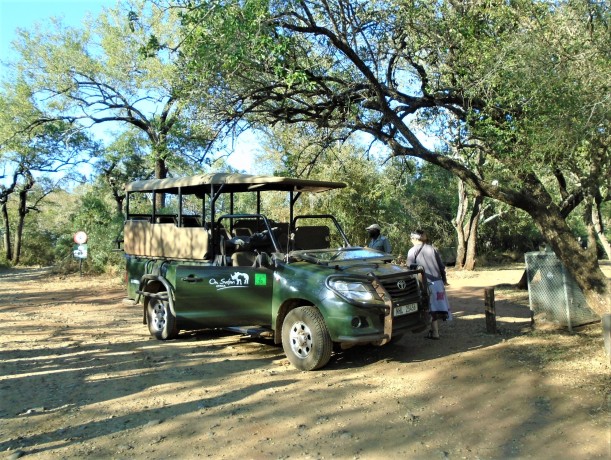 The one I got in actually left first but we were soon overtaken. The drivers kept in touch with each other so if one spotted animals they let the others know.

It was really chilly, and there were blankets in the truck for us to use. Heavy ones. The sun wasn’t up over the ridge yet so the light was muted.

The first thing our driver stopped to show us was a very large Rhino down in the valley below wading out of a water hole. I zoomed in as much as my camera allowed, and then zoomed again when I edited the photo! If this was the only horned Rhino I saw this photo was going to have to do!

It was very far away.

Then we continued on. The driver stopped again and said there were elephants down by the river… I took his word for it and took a photo. I actually couldn’t see the elephant until I looked at the photo on the computer. I really love the photo. But… I was getting worried that we wouldn’t see anything up close. Can you see the elephant? 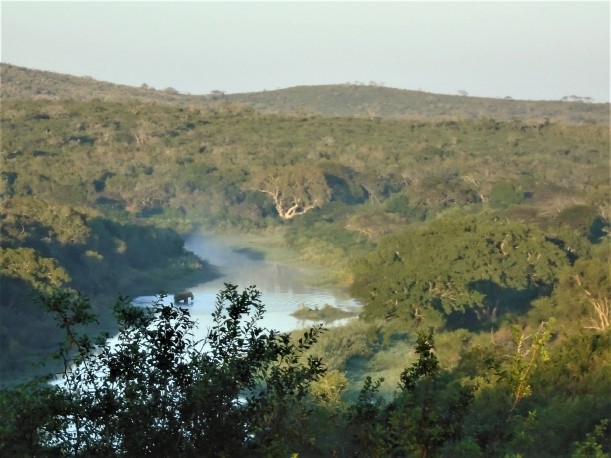 We were driving around for hours. It was a large park, mostly scrub brush with a few open grassy areas.

The driver stopped again to point off in the distance and told us there were Giraffes. I could not see them. At all. But, again I took a photo at maximum zoom aimed where he said they were. 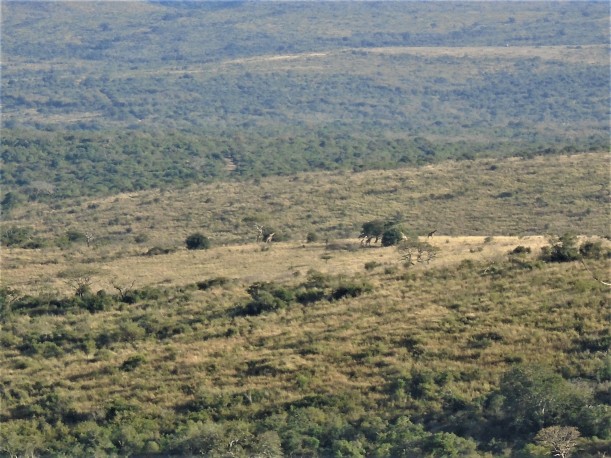 Once I got a look at the photo on a computer – couldn’t make them out on the camera display – I saw them. Then zoomed and cropped. Yep, Giraffe. But… I wanted close up animals!

We kept driving… and… FINALLY!

The black across the top is the roof of the truck. He or she stopped to look at us for quite a few  minutes before continuing to meander along into the brush. 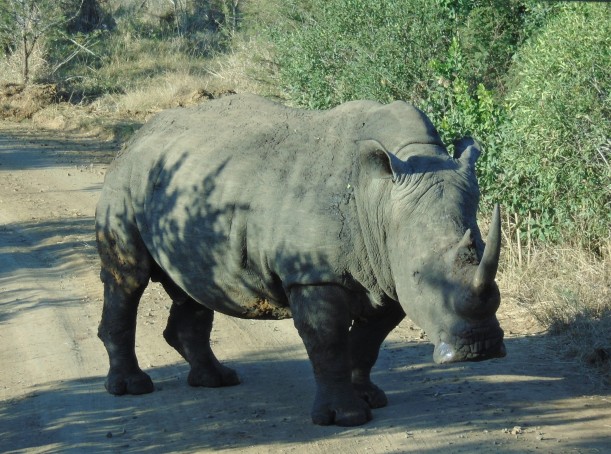 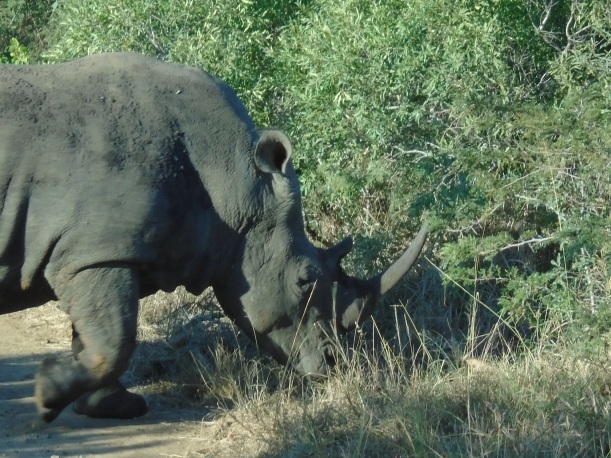 Then we started to see more animals. 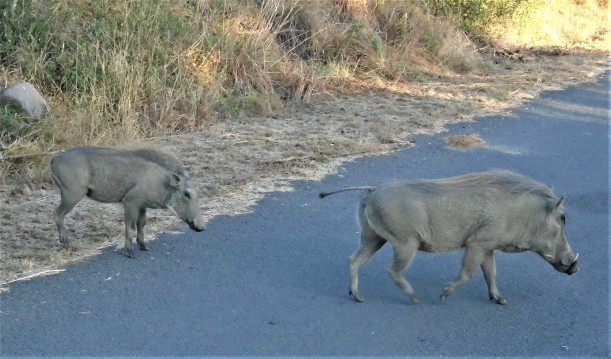 Many types of antelope – unfortunately mostly we saw their behinds as they disappeared into the brush. But I did manage to catch these shots.

Cape Buffalo, which are different than Water Buffalo. Smaller and more docile. This guy was just plodding along down the road and wouldn’t get out of the way.

Saw several of them along the way.

Zebra – these two blocked us for a bit and took their time wandering around the truck from front to back.

Then we stopped for lunch – BiBs (the hostel we were staying at) met us at a picnic ground with a BBQ lunch. Was a really nice spot with lots of warning signs!

After lunch we continued the safari.

An entire herd of Elephants of all sizes and ages crossed in front of us!! Soon the other vehicles arrived. There were around 30 animals. They crossed the road, and then the drivers whipped around to tear up the road to where they were expecting the herd to be at next.

I shot a bunch of video clips with audio but can’t post them on this blog unfortunately.

Eventually, after crossing in front of us about four times, they all ended up down in the valley below us with other animals.

Now for my really sad story.

As we were tearing around to meet up with the herd on their next crossing, we passed an old Bull Elephant who was in the brush by himself. On one of our repositioning drives he decided to step out in front of us. HUGE old bull. And he was pissed off. Our driver stopped and revved the engine to try to scare him off. He wasn’t having it and started trumpeting. I pushed the record button on my camera and was filming the entire encounter… I thought. He threatened and came at us, it was thrilling and terrifying. As I thought I was recording I did not get any still shots… Sigh. When he finally gave up and walked away I went to look at the recording and the damn button hadn’t locked and I had NOTHING recorded!!! Whaaaaaaa…. One of the other gals shared hers on our Facebook group so I have access to it.

We did not see any cats at all, but they are notoriously hard to spot.

All-in-all it ended up being a pretty exciting day!

More to come –  Walking Nature Tour in Saint Lucia, then onto Swaziland/eSwatini to stay at a no predator game reserve, then Mozambique for a week!