My trip to Africa – which included South Africa, Swaziland which is now called eSwatini, and Mozambique – lasted from May 16th to June 6th. It has taken me until today to share as I then left on June 8th to work at a camp as a cook/baker for the summer and only got back home this past Sunday!

It all started back in September 2018 when I saw a flyer on the bulletin board in the Student Services Building – it said VOLUNTEER NEXT SUMMER on it. I was looking for more volunteer opportunities so I took the flyer to my desk to read more. They were holding on campus information sessions and the last one was at 4 p.m. that afternoon. I was off at 4 so I hot footed it over to learn about the program.

The organization is called Volunteer Eco Students Abroad (VESA) and originated in Australia; they have offices in several countries now. They have projects currently ongoing in four countries – South Africa, Ecuador, Laos and Fiji. I was most interested in the South African one (mostly due to climate – not a fan of jungles, and it was on my “list”). So I filled out the interest form at the session.

Two days later I was accepted and made my deposit. You pay your way and spend time doing volunteer labour, then have the opportunity for lots of adventure tours and experiences after. With the African project there was an add-on tour to Mozambique which I opted to take. Why waste the opportunity to see as much as possible while there?

VESA encourages the volunteers to do fundraising to offset their costs. I made and sold Christmas cards and did a Facebook Fundraiser – and I am incredibly thankful to all my friends and others who supported me!

I left home on May 16th – rode the GO Train for the first time and then the UP Express to the airport from Downtown Toronto. Was a good time of day as nothing was very busy.

My flight left Toronto at 6:20 p.m. and we landed in Frankfurt at 8 a.m. the next day (local time). Then it was a long day to kill, flight didn’t depart until- 8:45 p.m. for Johannesburg! Ate breakfast and dinner at a restaurant in the airport, used the “rest” lounge which had recliner style chairs where you could nap. Walked around, did crossword puzzles, etc. The flight to South Africa was 10 hours and 40 minutes long. They turned the lights off right after feeding us. I was really tired but sleeping is NOT easy is economy! Then another long layover as the flight to Durban wasn’t until 3:15 p.m.!

Finally arrived in Durban around 4:30 p.m. on May 18th, then waited for the VESA representatives to greet us. Then it was a three-hour drive to our destination.  This was the longest transit I’ve ever done on any of my various trips – from the time I left home to the time we arrived at our destination it was 52 hours! I was exhausted.

Unfortunately, as we were driving at night, I wasn’t able to see anything on the drive to St. Lucia. We arrived in the complete darkness at BIBS which is the hostel where we were staying. It was pretty late – around 10 p.m. They had dinner for us, and did introductions, assigned us to our work groups and briefed us on what we would be doing. And also gave us strict warnings about roaming about on our own and the dangers of the area – mainly the hippos! 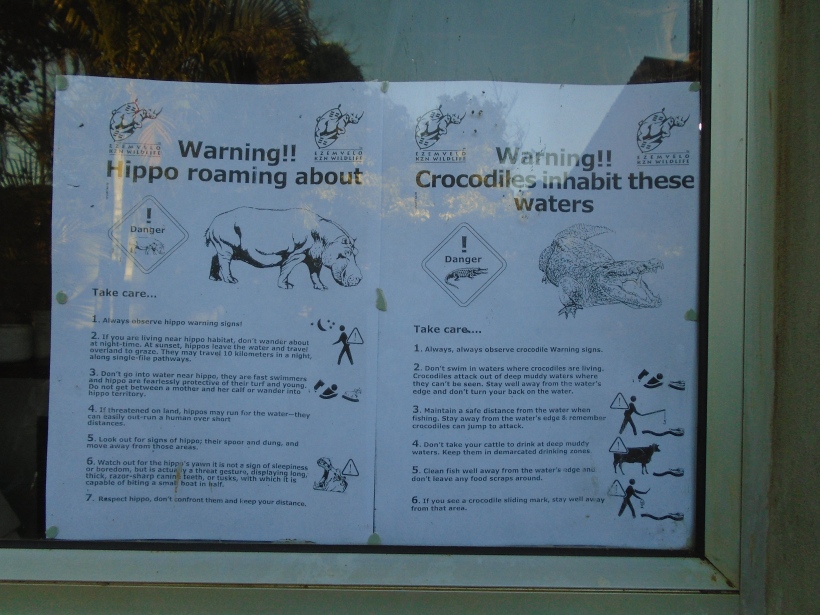 I was very surprised that we were actually starting work in the morning. I thought we’d be given a day to recover from travelling! They did let us “sleep in” so we didn’t have to leave until 9 a.m. My group was assigned to construction for the first two days, then we rotated off to the other areas – education (school and a daycare/orphanage) and then the conservation projects (wild cat sanctuary and crocodile rehabilitation centre).

VESA has posted the season report so if you are interested in specific details of what we accomplished you can read about it here.

The group of volunteers was around 72 I think, and there were a couple of parents who came with their kids in the group. So, while I was still actually the oldest, I wasn’t the only “mature adult” in the group.

Before we left for our projects in the morning on Sunday, we were taken on a walking tour down the street to see where the stores, coffee shop, pharmacy, etc. were. And more warnings about hippos and not going out of the hostel grounds alone. This was the tourist strip in St. Lucia – lots of hotels/hostels and tour offices. It was only a few blocks long and at the end there was a roundabout and the entry to the park was just past that. 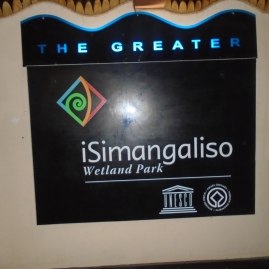 Then we got on our assigned buses and were taken to a Zulu cultural centre which was fascinating.

We were provided with demonstrations of traditional dances, dress, had social structure explained and the site was set-up as a village so we could see the buildings and compounds that were used.

There was a demonstration of reed mat weaving and I was the “volunteer” who got to try it! I thought I did pretty well. 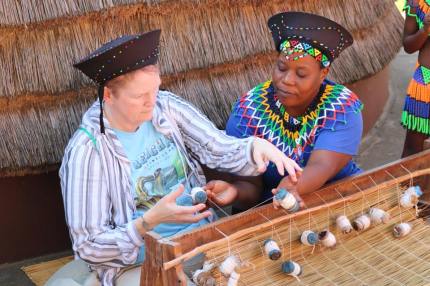 We then ate a packed lunch in the parking area and after left for our assigned projects.

I consider that I was lucky to get the construction rotation first as we ended up working one and a half days, the other groups got two full days. Although, our two days were the hottest of the week! Really hot!

There were two construction sites so our group was split up and I was in the group taken to the smaller site down the road from the larger site the first afternoon, and then worked on the first site the second day.

Everything gets done the hard way – had to carry “bricks” (which are the shape of what I know as “cinder blocks”) from the roadway down to the building sites, then had to mix the cement BY HAND. That means you dump sand, gravel, bags of cement powder and add water on a sheet of plywood or just on the ground, and use a shovel to mix it.  This is not easy! Then you shovel it into a wheelbarrow and then hope the strongest person there will move it to where it needs to be!

All holes were dug by hand too. Luckily our group had an assortment of strapping young men who were a bit competitive in that area. 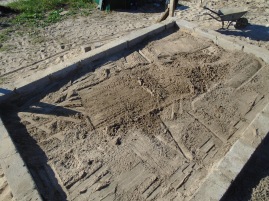 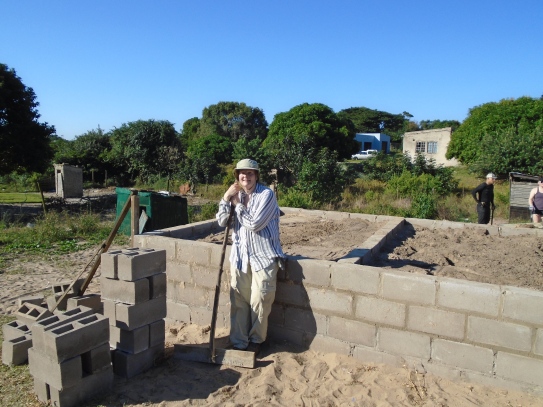 Above is Site 1 on day two. I was pushing wheelbarrows of sand dug up at the top of the hill down to fill in the foundation, then I got in the end “rooms” to spread and level off the sand. This house was five rooms long. 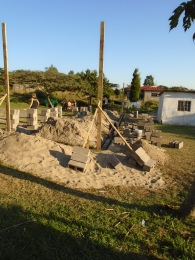 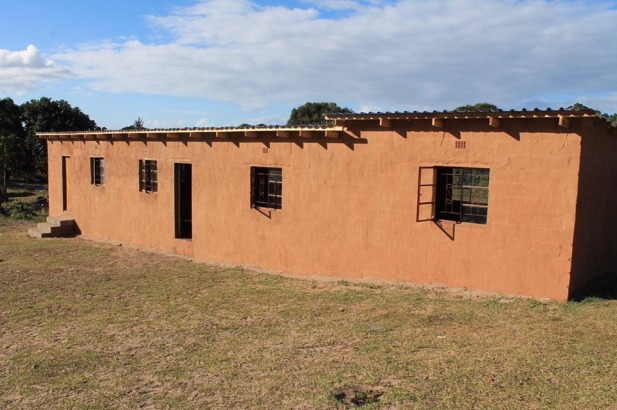 Above is the house from Site 2 – as I was there on the first day the construction stage is earlier on. The last photo is what it looks like now at the end of the season.

It was exhausting work, particularly in the heat. But satisfying.

So that was the first four days of my trip and the construction portion of my volunteer activities.

I’m going to break this up into a series of posts. For my benefit as well as anyone who is reading it!