Last month I went on a two-week Transatlantic cruise with my sister and her family on the Disney Magic from Miami to Barcelona. It was a great trip – VERY relaxing and smooth. 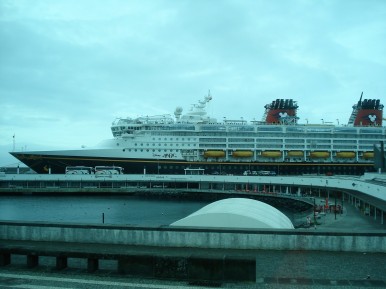 I have cruised before – six times – on other cruise lines. My favourite cruise line being Royal Caribbean which I’ve been on four times. While I did enjoy the Disney cruise, I will still rate Royal Caribbean as my preferred cruise line (note that it has been quite a few years since I cruised with Royal Caribbean.) As I am, ahem, “mature” I don’t require all the family and children oriented extras. Even though I don’t need them, they are amazing on the Disney line! If you have kids (and can afford it) I would definitely say take a Disney cruise, but for me, as a single adult, other options suit me better.

The trip was a gift so I actually did not pay for the cruise – I just covered my airfare and all my own expenses. If I had been paying for the cruise – I would probably NOT have gone on Disney. It is expensive. And… we were Concierge level which is VERY expensive. When I look at the cost of that vs. the cost of other cruise lines it just doesn’t seem to be justified.  Not to say being Concierge wasn’t awesome and amazing, BUT for me the cost of that extra service level wasn’t necessary to my enjoyment of a cruise.

My cabin was very comfortable and the room host/steward, Jojo, was always around and making sure things were good. Cabin was a huge upgrade from my first cruise cabin in 1988! The bathroom was actually split into two – on room was the shower with a sink, the other a toilet with a full vanity – nice as the shower didn’t steam up the mirror! 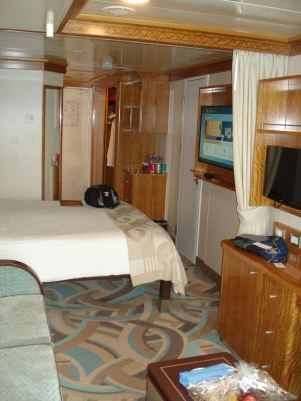 Compare the above to this shot from our 1995 Mediterranean cruise! 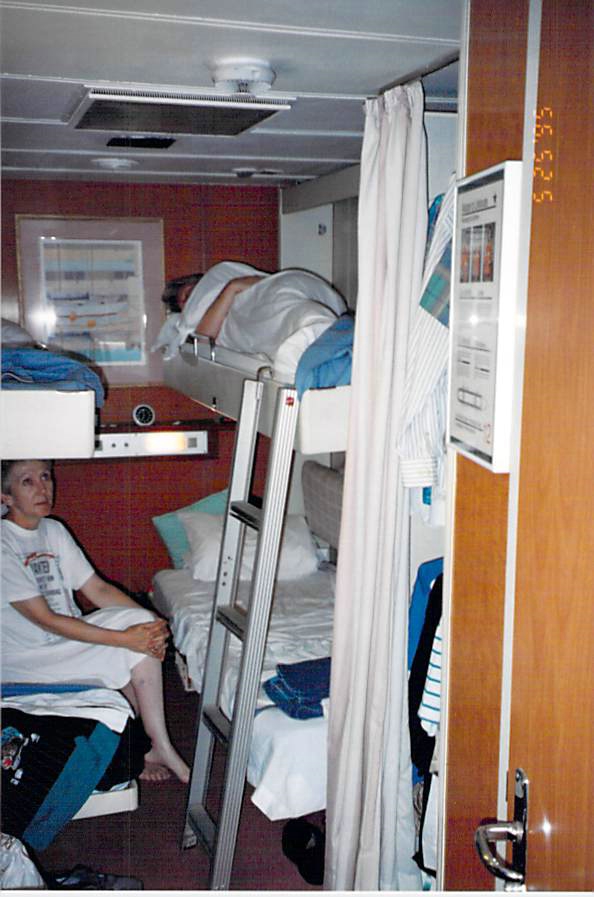 Having the veranda was great.  I was never really impressed with the idea of paying extra for a veranda, however on this trip, I loved it.  Probably would not be such a great extra on a stormy crossing or trip where you were off the ship everyday, but for the long calm days at sea I sat out there often. 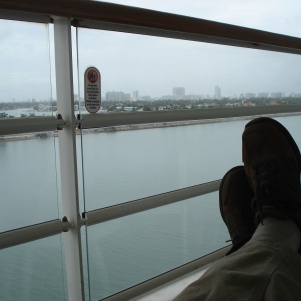 And it was great to watch docking and view the ports from too! 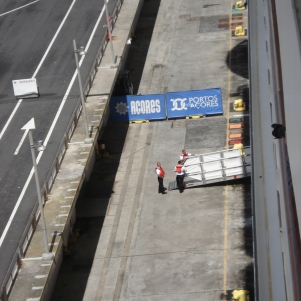 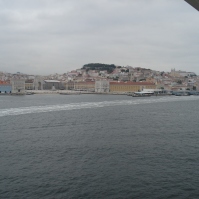 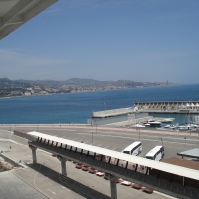 It was wonderful having the Concierge staff available (Alina, Blanca and Emanuela were fantastic, as were the rest of the staff) to take care of things like getting tickets, picking up passes, confirming flights, and making sure I had heavy cream available for my coffee in the lounge, etc. I could manage do that myself and save $$$$ on a trip; that would be another whole vacation paid for! And having the private Concierge Lounge was super nice – always had drinks and snacks available, indoor and outdoor deck seating where you could sit and read or in my case, draw and paint.

It was a great trip. Minor hiccups aside.

As this was a Disney cruise they had the characters out and about every day for photos ops and roaming the decks. Not ALL the characters, but the main animated and top princesses. I was EXTREMELY disappointed that there were no superheros… VERY VERY disappointed. However, they were running ALL the latest Marvel and Star Wars movies, along with other Disney owned titles. We even had the premier of Solo, complete with red carpet on board on opening night. Saw Infinity War too.

My nephew and I challenged each other before we boarded in Miami – Who could get the most character photos.  He inferred I would never beat him. Little did he realize just HOW competitive I can be. As we had seven – yes, SEVEN – full days at sea the photo ops were constant. As I had nothing pressing I went from location to location getting photos with all the characters on board… EVERY SINGLE ONE… Multiple times! Mickey and the gang had different outfits for each day or theme, so of course I had to get photos of all. Sometimes I had to ask people in line WHO I was getting the photo with as I wasn’t familiar with the character! I made lots of friends in line – and the lines were never long. There were more adults getting photos than children. I ended up with 207 professional photos taken, along with the ones on my own camera. My nephew… Zilch. 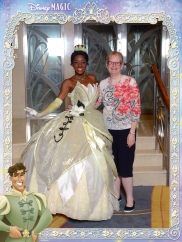 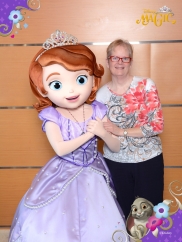 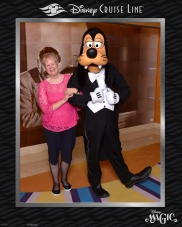 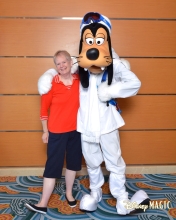 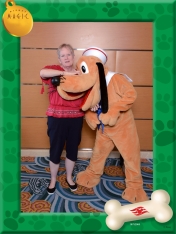 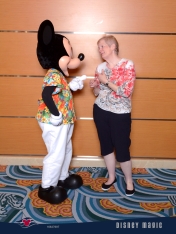 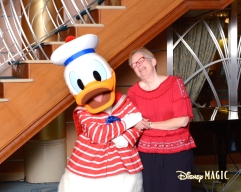 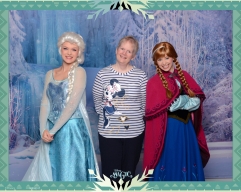 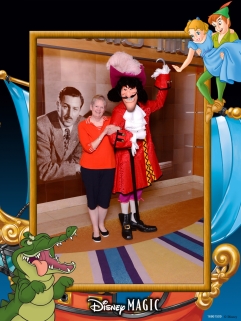 I really have to say that the performers were AMAZING. Truly wonderful at being the characters in all situations. AND had astounding memories too as you could continue conversations started on one day with any princess a couple of days later and they honestly seemed to remember it. I loved Rapunzel and Stitch, in particular. And Chip and Dale were great – on my first photo with them Chip stole my camera and started taking photos/selfies… 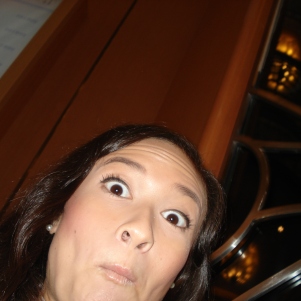 Then Stitch did it too…

I think that may be my favourite photo of the trip! LOL

The food was good. And our waiter Guiseppi was wonderful as he really understood my dietary issues – his wife was also diabetic and followed the same dietary restrictions as I do. So he was anticipating and actually bringing me things that he knew I could eat without being asked. I did, however, get heartily sick of shrimp/prawns and seafood by the last couple of days of the cruise. I found things to be under seasoned in general, AND numerous times I would get excited about an entree option only to find it was prepared in a way I could not eat: cooked in wine (loathe it) or breaded (don’t eat carbs) or rubbed/sauced (don’t eat sugar). The excitement I felt the night we had rack of lamb and it WASN’T breaded was unbelievable!

There were three restaurants for dinner – Lumiere, Rapunzel’s and Animator’s Palate. We rotated to a different one each night with the same serving team going with us. Was okay. They really hype this rotational dining – was always being mentioned by the cruise director.

I do have to say, in all honesty, that I have enjoyed food more on a Royal Caribbean cruise (they did have the Executive Chef of the line on board that trip though… might have made a difference!) How I judge this is that I can still name and remember multiple specific things we ate on that cruise back in 1991! I would be hard pressed to remember anything specific from this latest trip.

Crispy bacon was hard to get – only twice did it actually come in proper crispy form. Sure, I could have sent it back, but I had other things to do.  Also, two mornings my breakfast orders were messed up. Only at dinner, on Disney, do you get the same serving team; breakfast and lunch you get whomever is waiting the section they seat you in.

I always went to the main restaurant to be waited on. Most people ate at the cafeteria style and other places on deck, etc. as they had longer hours and were self-serve. I don’t like that, I want to be waited on and not have to guess what is in the food.

The crossing of the Atlantic was unbelievably calm. Like glass most days. This is rare. We were told by the captain that this has never happened in his career. And experienced “crossing cruisers” also said this has never happened to them either. I was actually looking forward to a little North Atlantic weather (I like it stormy) but, this was really pleasant! The grayest day of the entire trip was Miami when we boarded.  And there were many great sunsets and sunrises! 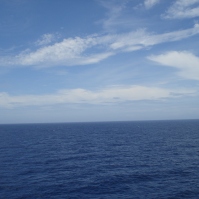 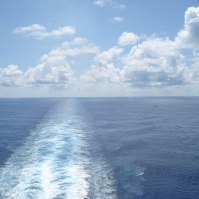 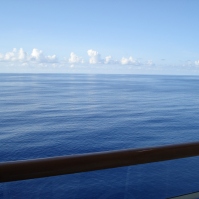 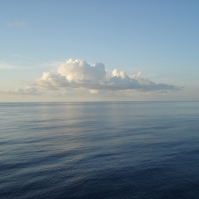 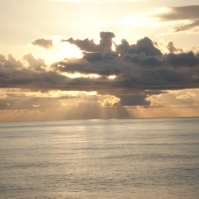 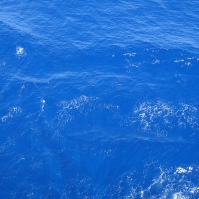 I took advantage of the professional photographers and had lots of photos taken. What the heck! I was buying the package of “all photos” as narrowing it down to just 10 or 20 was impossible. So I took every opportunity available. Solomon, one the photographers knew my name and cabin number by heart by day two, and even sent me a special thank you card and print of a princess! LOL 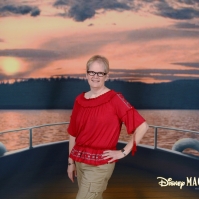 That last photo above… well… That was the day after Cadiz. When boarding after the shore excursion I did a face plant on the gangplank… hard hits on knees, both wrists and my head. Had multiple ship security personnel and a ranking officer on me immediately telling me not to move. Long story short… left wrist had a “possible fracture.” I had a dent in my head for a few days and my right knee finally doesn’t hurt to touch anymore.  I went for more x-rays after I got home to confirm whether there was a fracture or not (the ship’s x-ray capability wasn’t high-resolution and they weren’t sure) and it was a bad sprain only thankfully.

Ports of Call were the Azores, Lisbon, Cadiz, Malaga, Ibiza and final stop in Barcelona. Really nice tours – Azores was a bit damp and cloudy but pleasant, weather everywhere else was nice and sunny. I’ll do another post about what I saw and did, including fun  shipboard activities! This one is getting pretty long.