When I switched to eating LCHF I struggled a bit with carbs as I missed them.  I experimented with recipes for “substitute” items made with nut and/or coconut flour but was supremely disappointed with the results.

However, time, as they say, heals all “wounds.” After 19 months of no carbs I have now discovered that my toleration level of these replacement items has improved drastically. Sure the textures are sometimes not quite right, but I haven’t had the real thing for long enough that my taste buds are accepting them. And mentally, I have adapted too – I’m not expecting an identical replacement item.

I’ve also learned what I need to do to recipes to make them suit my tastes and expectations. There is a definite learning curve to baking with nut, coconut and seed flours but once you’ve tried a few different recipes and processes you get the hang of it.

And one very important thing – keep your nuts, flours, seeds, etc. in the fridge! I went to use my psyllium husk powder to discover it was going rancid! The mason jars I keep them in work great in the fridge or the freezer.

I saw a recipe for LCHF Flatbread – the photos looked good (but we all know those can be staged!)  As I am home today (had eye injections, again, this morning) and it is hotter than heck outside (so not mowing or gardening!) I decided to give it a shot.

I messed around with the ingredients and have to say that I am pretty impressed with how it worked out.  Coconut flour isn’t my favourite as I find the flavour too strong, but in this recipe it works. 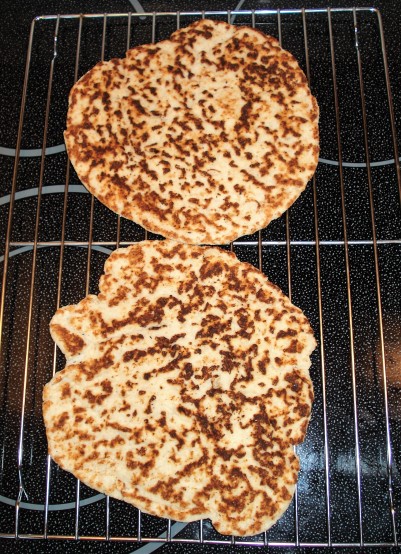 Optional: Garlic powder, herbs, other flavours to suit you preference (in this batch I added a couple of shakes of garlic powder.)

I ate one warm with butter and it was really very good!  (It was my first one… which was crumpled up as I didn’t put it in the pan carefully enough.) The other three I will eat over the next day or so – I am looking forward to a wrap, and maybe a hot dip, or curry!

The texture is spot on, the bread tears like a “normal” Naan-type flatbread, it holds spreads and dips well too.  The olive oil and the bit of garlic powder counter-acted the coconut flour flavour enough for me to not notice it.