I’ve finally had a chance to sit down and blog!  It’s been a busy week.

My Halloween jobs started on Friday night with one appointment, then Saturday morning I painted the staff and cast of a haunted house at a park facility in town (took no photos), then back home to paint my appointments for the rest of the day/evening.  Then Sunday I had morning appointments, then a large birthday party in the afternoon and more appointments in the evening.

Then I was tired…. Still training at the new day job so lots on my mind… trying to get caught up on housework (which was COMPLETELY ignored over the weekend!) Then had my drawing class Tuesday night (BTW the instructor told me “You can draw, no doubt about that!) and then yesterday was mom’s bath day… so this is the first time I’ve been able to sit and relax and even THINK about blogging!

As usual when I take appointments there is usually a no-show or two but that has never been a problem as I have a lot of last-minute calls that I can then fit in on short notice.

For the first time ever I posted an ad on Kijiji.  I posted it mid-October and it generated several new customers.  I had three of them in the studio at the same time and they were chatting about how they had been lamenting there not being anyone in town to do the make-up they wanted when they saw my ad and called.

Three of the guys came to get their make-up done twice!

My last appointment was a couple that were cheating, fighting and killed each other… she had her throat slashed and some bruising, he had scratches, a black eye, bruised knuckles and a butcher knife in the … ah… well, family jewels!  I stuck them in front of my black back drop and did high velocity blood splatter on them… fun, fun, fun!  Now have to wash the backdrop – I’m worried it won’t fit in my washing machine.

I did the usual skulls:

Fairy tale meanies (‘Grandma, what big teeth you have!): 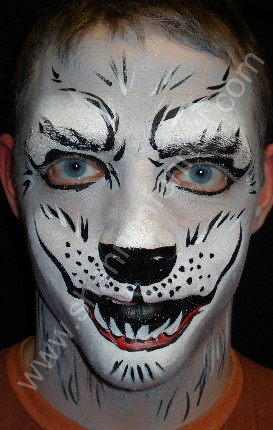 And the imaginative silly ones:

I did a very excellent Edward Scissorhands… I am kicking myself for not getting my own photos of him.  I made the scars ahead of time from latex on a glass plate and then glued them in position with spirit gum, then did the make-up.  He had his own hair done in an appropriate style and his costume was excellent!

He showed me some photos on his phone the next day and promised me some… but I still haven’t received them.

Also did a half-face sugar skull which was really pretty – my very first one – and completely forgot to take a photo.

The rest of them were typical zombie, monsters, etc.

There was also a girl Avatar who actually brought the packaging of her costume so I could see how to do her make-up for her.  She was very anxious that I do it right – although the photo on the package was a crappy job of face painting.  I, of course, did it much more effectively!  LOL

Numerous vampires (I am so done with Twilight) and princesses of course.

It was a nice birthday party – it was for twin girls and the parents had rented a small hall and it was great!  They had the lights low (except over me where I was set-up on the stage), all adults were in costume (I think there were about 4-5 sets of parents helping) all the food was themed – finger cookies, jack-o’lantern shaped cakes, etc.

Really nice party.  I was booked for two hours and stayed an extra half hour to paint the last of the kids.  Paid time of course.  It was a beautiful day for a drive too.

Mom and I have a ton of leftovers – we had probably about 40-50 kids – and 148 full-sized chocolate bars.   They were walking right by our house without stopping.

One thought on “This Halloween’s fun”